How do you design a brand to fit with four organizations?

Launching a campaign is not a simple task, as anyone who has done it will tell you. Having a hundred-year pandemic strike toward the end of the silent phase makes it a little more complicated. Add on top of that a system presidential change mid-stream with a new leadership vision for communication. It makes for an exciting project.

This was the story of the For Alaska campaign that publicly launched in March 2021. But as discussed further down, Alaskans are rugged and resilient, and that is what this campaign captured. It has been one of the most fun and visually striking campaigns that Wessel Creative has worked on to date, aiming to reflect both the region's rich tradition of hard blue-collar workers as well as its growth in research, technology, engineering, and other emerging industries.

As we developed our communications, we first must consider our target audience, not only demographics, but also what makes them tick, what is important to them, who they are at their core. The below characteristics can be summed up into two core attributes: RUGGED and RESILIENT.

Believe in the importance of UA

Roll up your sleeves attitude

Alaska is steeped in a rich tradition of Indigenous knowledge, hard workers, and those who have helped advance its standing. The region is also primed for growth in emerging industries. We wanted this campaign to both honor Alaska’s ruggedness and resiliency while looking toward an exciting, bold, and vibrant Alaska.

When you think of Alaska, you often think of vast, beautiful landscapes. It truly still is the Last Frontier. We developed the campaign logo to not only reflect the campaign attributes, but also the regions of the three Universities: the skies (Fairbanks), the mountains (Anchorage), and the flowing waters (Southeast).

The wave—known as the Momentum mark—has three peaks to represent the three universities. It also exemplifies constant motion, a continued movement forward. It is fluid and ever-evolving. It can both shape its surroundings and be shaped by its surroundings. Momentum is the very essence of the University of Alaska and its place in the region.

The mark uses a rugged look with a script font to reinforce the idea that much of Alaska has been built by hand. This idea juxtaposes the vibrant colors of the evolving future for the state. By connecting this culture with a transitioning region, Alaska can truly thrive.

The For Alaska campaign both honors Alaska’s resilient past while looking toward an exciting future. The campaign color palette reflects that sentiment, capturing the color scheme of the state flag as well as the other vibrant colors that highlight the Alaska landscape. Other than the blue and gold, each of the other four colors would represent each of the four campaign themes/priorities. 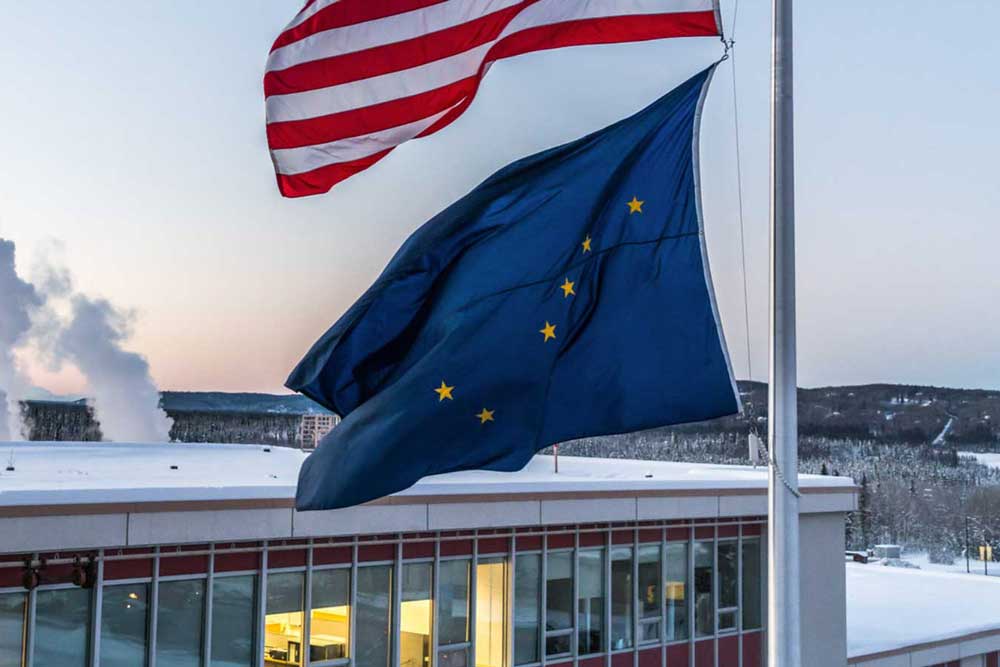 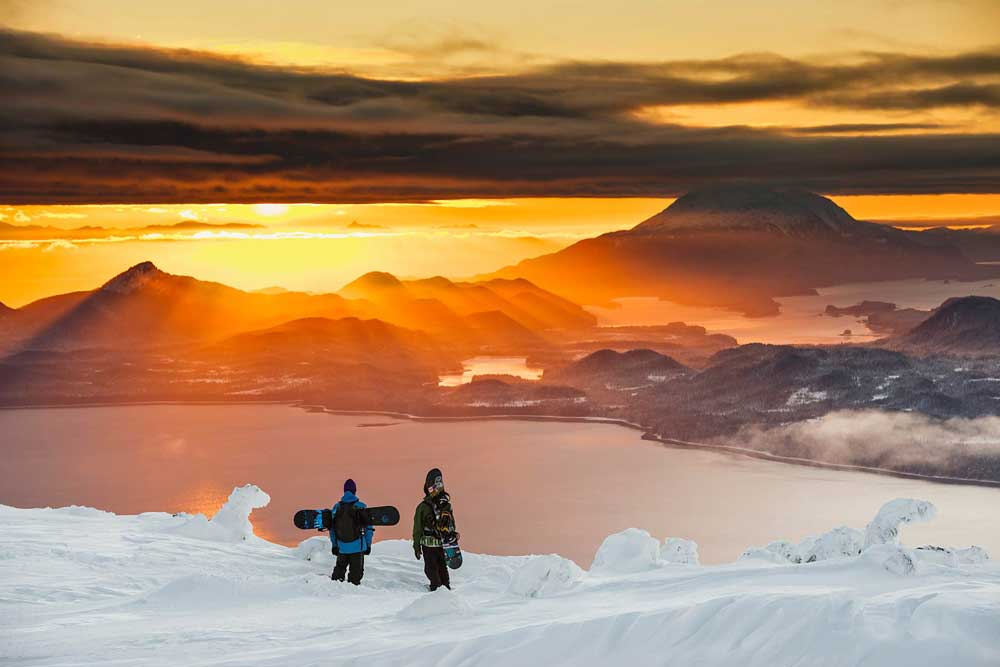 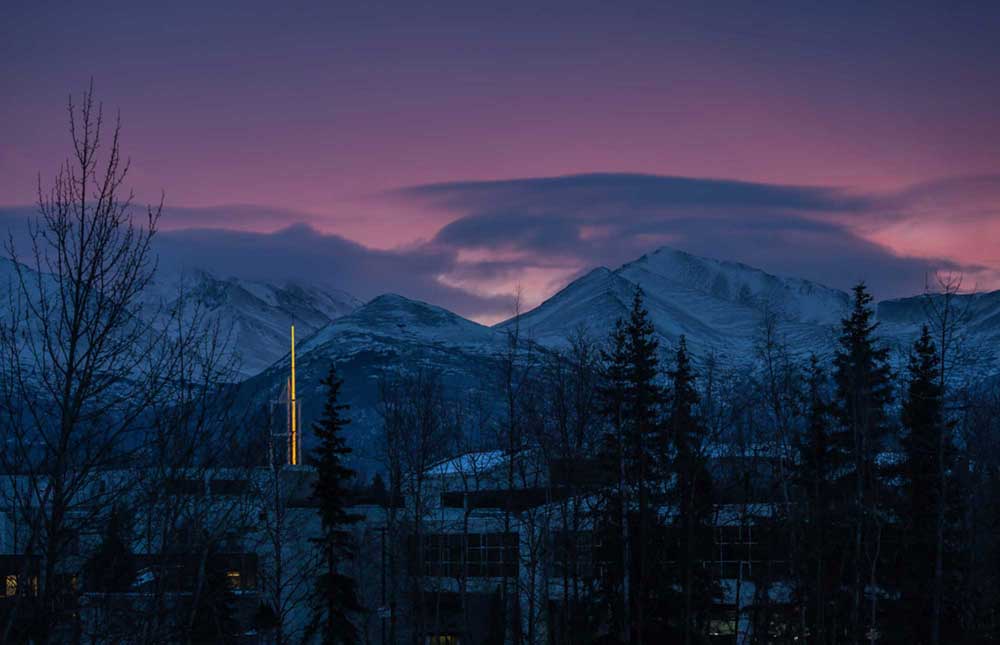 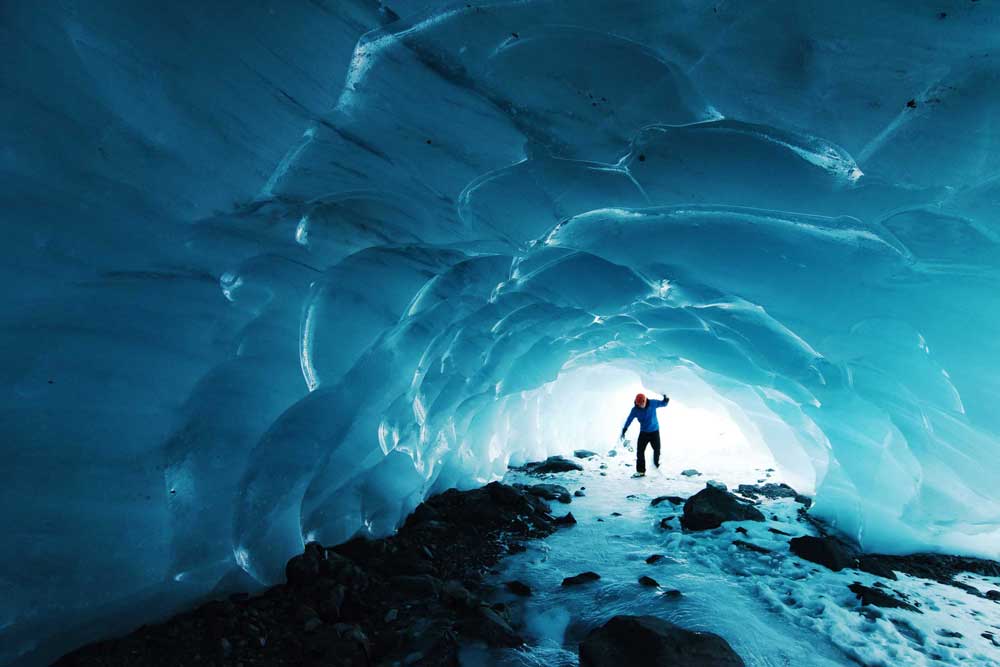 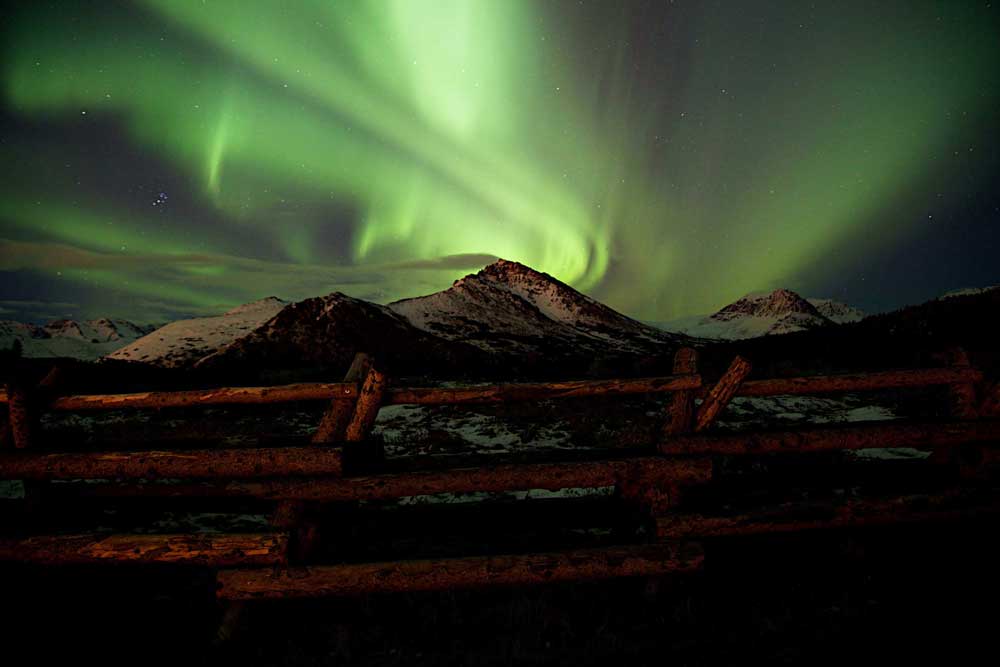 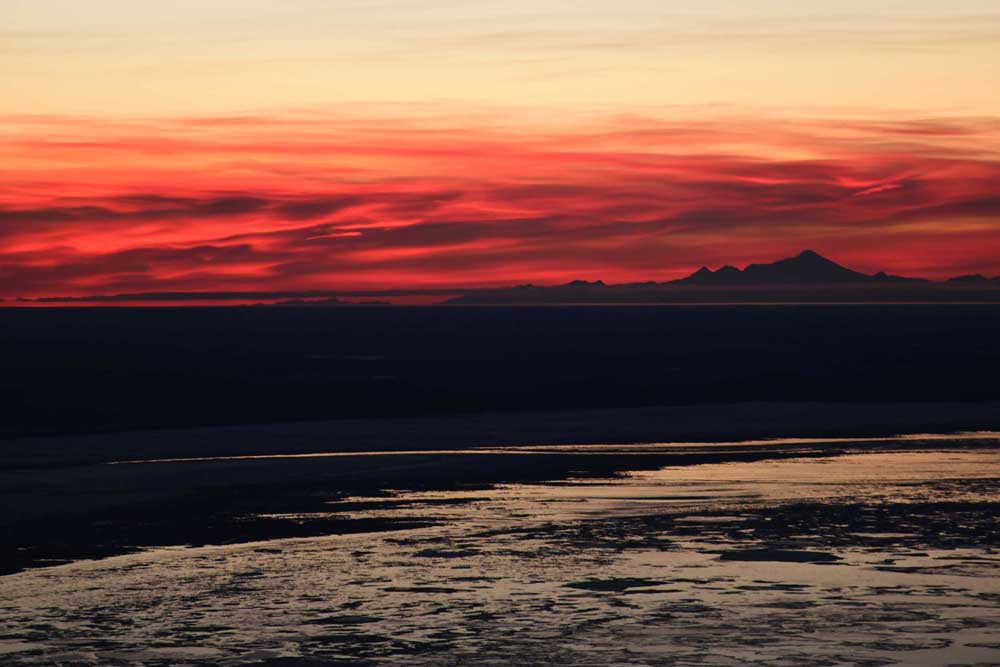 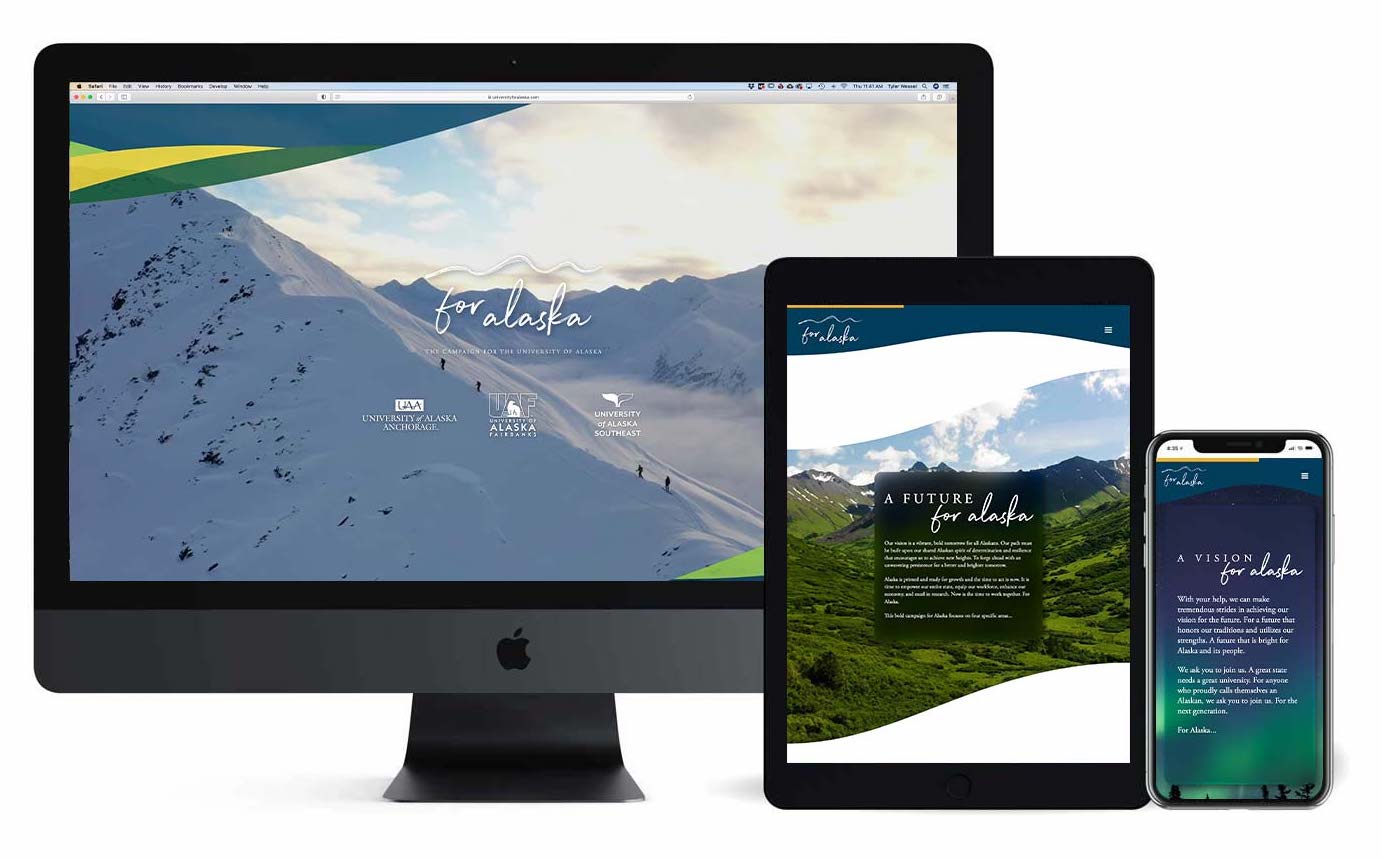 From the beginning, we wanted this website to show off Alaska, its magical landscapes, and give a sense of awe and Alaskan pride. We also wanted to give a sense of momentum and action, so we moved forward with a horizontal scrolling site, completely in the user's control as they scroll up and down. It provides a small feel of almost gamification and makes the visitor want to play and explore more.

Because of the complexity of this site, and due to limited broadband in rural Alaska, it required an almost entirely different tablet/mobile design that utilized imagery instead of video. This wave shapes in the design still capture a sense of movement that highlights the state, university, and its people.

Click below to view the live site and have fun with its various interactive elements. 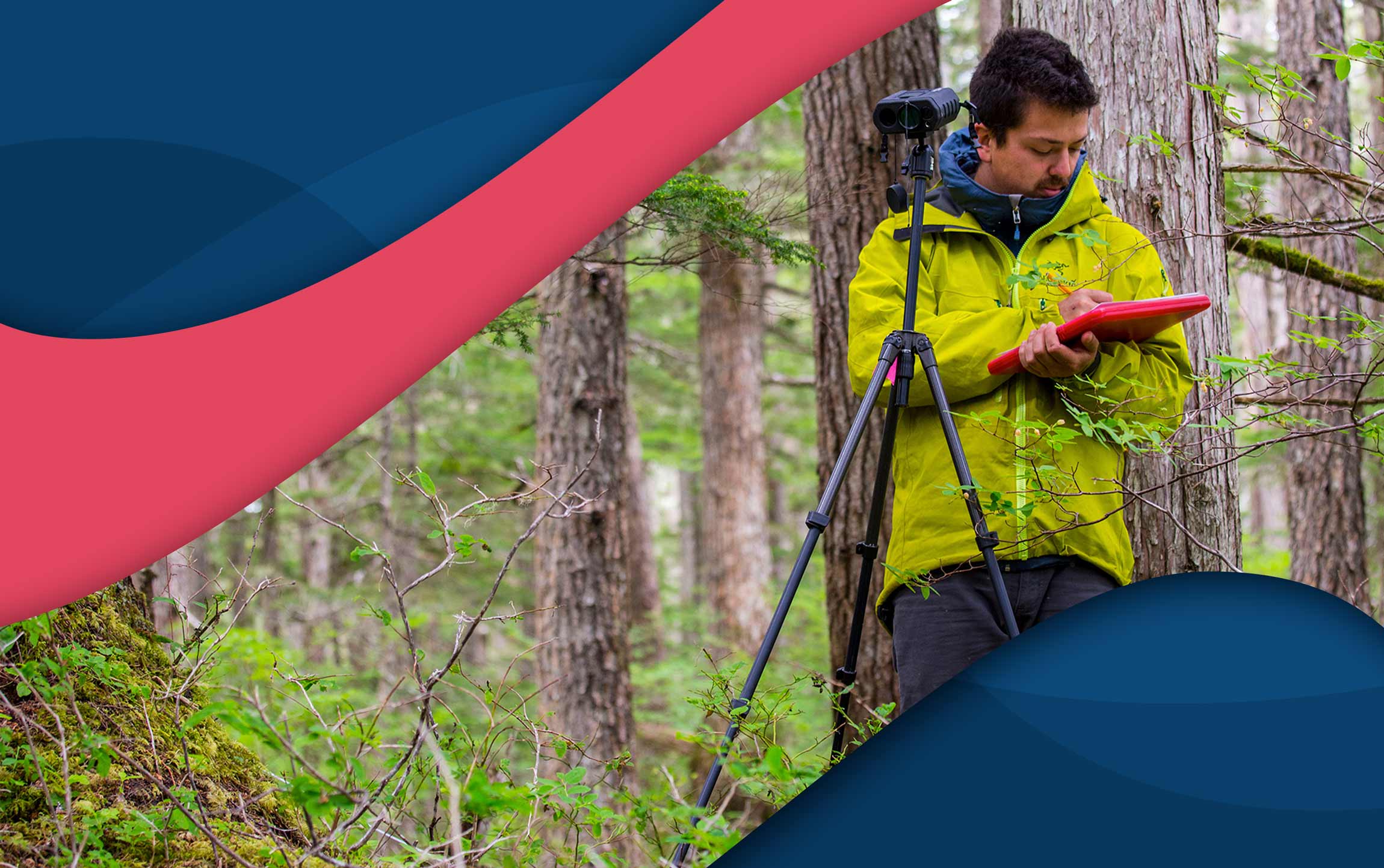 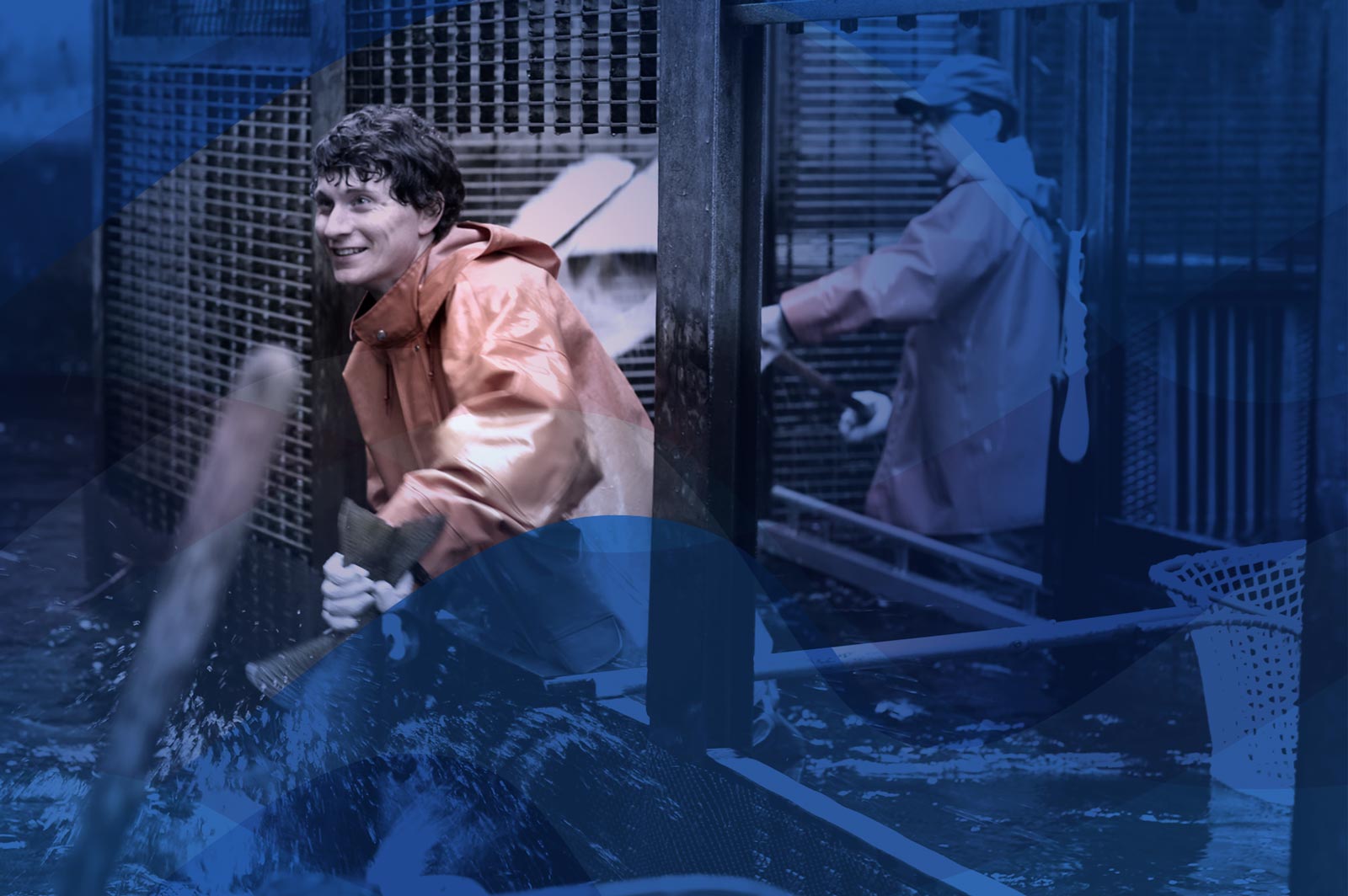 As part of the campaign and its official launch, we created a series of videos highlighting not just the campaign as a whole, but the four campaign themes and student need. For the main anthem video, we wanted a really dynamic piece that—like the rest of the communications—tied together Alaska's past with its oncoming growth. The script was carefully crafted and edited to make sure we got it right, not just for the universities, but also for the Indigenous peoples.

As Wessel Creative is located on the east coast, it required strong collaboration with local videographers 2Core Films, who not only handled the interviews, but also the anthem voiceover and the majority of the dynamic b-roll needed for the various videos. Once all of the footage was received, Wessel Creative did full post production to craft the message and tell the campaign stories.

If you have the opportunity to work with Wessel Creative, do not hesitate. Tyler is innovative and balances the technical aspects, storytelling, and creative design like no other. To top it off, he is an absolute joy to work with. He truly became part of our team, even from four time zones away and without ever setting foot on any of the university campuses.

Working within a university system with three separately branded identities, Tyler was able to create a brand for our comprehensive campaign that resonated with each of us. Our Foundation President remarked that the creativity and level to detail is on par with the bigger creative agencies out there.

Tyler has helped take us to the next level. He listened to what we wanted to achieve and then ran with it. His video storytelling literally had us in tears. He is a creative thinker and skilled at bringing multiple visions together for an amazing product.